A great iPad game which offers the excitement of soccer, but has the ease of play and fun of air hockey has just been updated. Air Soccer 2011 HD 1.01 has been designed to make the player feel they are in a real soccer stadium.

Released by Pedala Games Air Soccer has stunning HD graphics and sounds which will really bring your iPad to life. Players can choose to play a single match or play the career mode with one of the 32 national teams.

There are twelve different trophies to be won, and you can challenge your family and friends in the two player mode. Teams are based on the FIFA 2010 world cup.

The game has featured in the “New and Noteworthy” section for sports games in 75 countries. When a player chooses the one player mode, the opponents have their own difficulty level compared to what they would be like in the real world due to the artificial intelligence of the game. 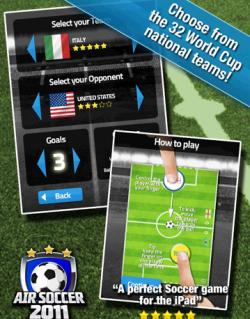 The sounds are just like a real soccer game with the crowd responding to the match. You even get vuvuzelas sounding when a goal is scored. See a video of the app below.