Back in November last year we brought you an article announcing that Fujitsu was planning on launching a 10.1-inch Windows 7 tablet sometime this year. We didn’t really know much about the said device at that stage, other than the rumored specs that had been surfacing.

However, Fujitsu has now decided to offer a few more details about the upcoming tablet PC – which according to a recent article by Shane McGlaun over on the slashgear.com website is called the Stylistic Q550 – including its specs, price and the expected launch window.

The Stylistic Q550 runs on an Intel Atom processor, has a weight of just over 1.5 pounds and features a 10.1-inch LED backlit display (which is anti-glare and uses IPS technology), front and rear facing cameras, USB slots, HDMI out, VESA mounting support and a dock connector. 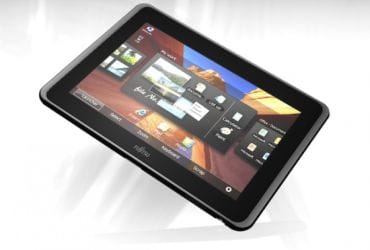 The Q550’s display — which according to Chris Martin at theinquirer.net has a resolution of 1280 x 800 — will accept both capacitive multi-touch and input from the included stylus pen. The tablet PC will be available sometime this spring, with a price tag of under $800.

As Chris Martin notes, the Q550 is said to meet demanding security and business needs, with features such as fingerprint and smartcard readers. Fujitsu claims that the Q550 slate will provide users with up to 8 hours of battery life per charge.