We have had numerous teases over the past few weeks about the possibility of quad-core phones showing up at this year’s CES event in Las Vegas. We thought HTC may be the first manufacturer to have the honor of this industry first, but we can tell you that the first quad-core smartphone to be shown has come courtesy of Fujitsu.

The Japanese company is not known for their smartphones, as most of you may even own a Fujitsu-Siemens branded computer since this is their main area of business. Like a growing number of other companies though, the temptation to enter the blooming smartphone market is as high as ever and the company has used CES as their stage to deliver the world’s first quad-core smartphone to a mainstream public audience.

Unfortunately, the device is still a prototype and was kept behind a glass unit so nobody could get their hands on it yet. There is also no name attached with the device so far, but the good news is that Fujitsu has already confirmed an initial list of hardware specs for the device, as well as confirming that the device will be ready for a proper showing at the MWC event in February.

So let’s move on to that quad-core chip, as according to Fujitsu their device will feature NVIDIA’s Tegra 3 processor which features on the likes of the ASUS Transformer Prime tablet and is clocked in at four cores running at 1.2Ghz each. Other specs include a mouth-watering 13 megapixel camera, LTE support, and a 4.6-inch display which Fujitsu are calling a ‘liquid crystal’ screen.

Another interesting aspect of this device is that it will feature a fifth processor which is hidden away and will be primarily used to conserve battery life when the phone is used for demanding tasks. For a phone that nobody has seen yet, this is full of promise and we can’t wait to see more at MWC. Check out an image of the device below courtesy of Droid-Life and let us know your thoughts on it. Bring on MWC 2012. 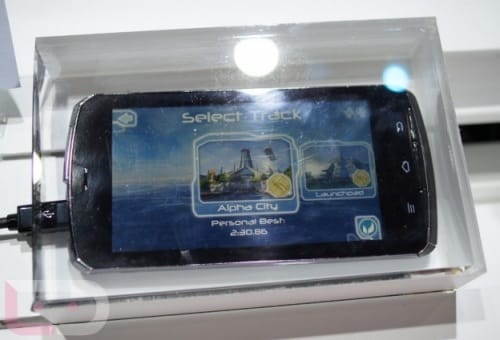 Are you ready to drop your current smartphone for a quad-core powerhouse?