There are quite a few digital cameras on the market that offer GPS / geotagging capabilities, enabling users to tag their photos with the exact location in which it was taken. However, Fujifilm appear to have taken the GPS concept one step further with their recently unveiled FinePix F600 EXR camera, which comes with a rather interesting feature called Landmark Navigator.

According to a recent article over at engadget.com by Zach Honig, the new Landmark Navigator feature will display places of interest on the Fujifilm FinePix F600 EXR camera’s 3-inch LCD screen. In fact, the mode is said to include one million pre-loaded places of interest from all across the world. It even enables users to add their own locations.

Thanks to the FinePix F600 EXR’s new intelligent digital zoom mode, even the most distant of objects can be made into frame-filling close-ups. Other interesting features on the F600 EXR include the Photo Navigation mode, which enables users to find their way back to previously photographed places and Tracking Data, which allows them to track a route of their travels.

Those who enjoy capturing video footage as well as stills will be pleased to know that the FinePix F600 EXR camera — which also features a 12,800 ISO high-sensitivity mode – does come with full HD 1080p movie capture with stereo sound. It also comes with a high-speed movie option that enables users to freeze fast moving action at up to an amazing 320 frames per second.

Other features include a rubberized body coating (on the black model only), Photobook Assist function, 33MB of internal memory and SDHC, SD and SDXC card compatibility. Are you thinking about buying a new camera? If so, do you like the sound of the FinePix F600 EXR? 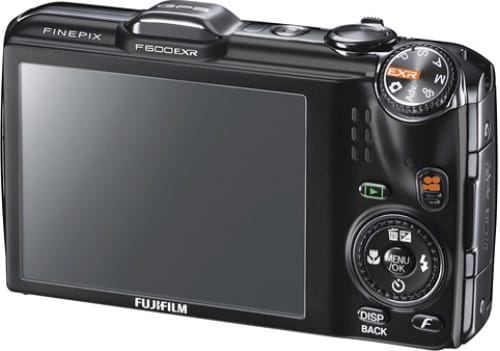