When Google Earth was launched we had no idea how popular it would become, so many companies use the service, but one has decided to develop its own system that will overlay labels on it just as Google does. What makes this so special is how it will be used on live TV with images that have been relayed from a helicopter.

The broadcaster about to use the new service is NHK (Nippon Hoso Kyokai) and the system in question is called SkyMap — sounds like something from Terminator. The data sent has the helicopters GPS position, zoom level and what direction that the camera is facing, all of which will then be digested by the computer mapping software.

Once all the information has been processed a virtual map will appear, showing what the real camera is seeing. Then SkyMap will be able to put labels on certain landmarks so he viewer will know just where things are, just as Google Earth does, but in real-time. 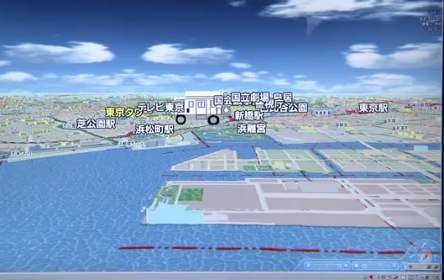 PC World says that this system is in use in other areas, The IDG News Service has an interesting video on YouTube that shows this system in action. There is even a chance that it could be used in time for the 2010 London Olympics.

Would you like such a system to be used for your daily traffic broadcasts? What else could this new system be used for?