The Freecharge app has just launched in India and claims to be the fastest way to recharge mobile DTH and data cards. While many users who have downloaded the Freecharge Android app are very happy with the service so far, others have been less than impressed, particularly with the offer of Freecharge cashback credit.

At the moment, Freecharge is advertised as India’s ‘number one recharge app’ and there’s no denying that being able to pay your bills in a matter of seconds is an impressive feat indeed.

Since launch, there has been some very positive feedback on the app which has subsequently been reflected in a 4.2 rating on the Google Play app listing. Breaking this rating down, we can see that over 65,000 users have awarded Freecharge with a 5-star rating, meaning that the majority of users are loving the service so far. 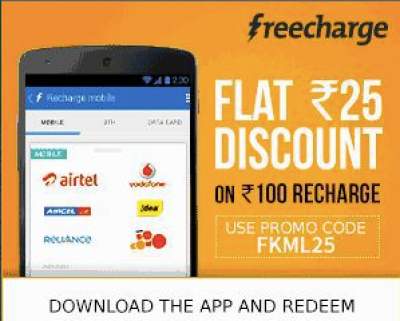 However, it needs to be said that there’s also over 8,000 1-star ratings from those who have had problems with Freecharge after release. Below is one example of many who have had issues trying to claim back the advertised cashback offer:

The good thing to note is that the makers of the app are constantly trying to fix individual problems for users, so that Freecharge service is back to its best where possible.

The app has recently been updated with even better features, including ways to get free food meals at outlets when recharging. How is your experience with Freecharge so far – are you loving it, or have you encountered any problems like those stated over on the Google Play listing?