Attention all Sprint customers now, as the carrier is offering a rather nice incentive to those who are interested in upgrading their contract by giving away a free Alcatel Onetouch Pixi 7 tablet.

We notice that many of Sprint’s social media channels on Twitter have now been sending out word simultaneously that consumers can now get their free Sprint tablet by switching to Sprint.

On top of that Sprint is also advertising a saving of 50% on their tariff compared to Verizon, AT&T and T-Mobile rates – you can see evidence of this in the Tweet we spotted from Sprint’s South Park store. 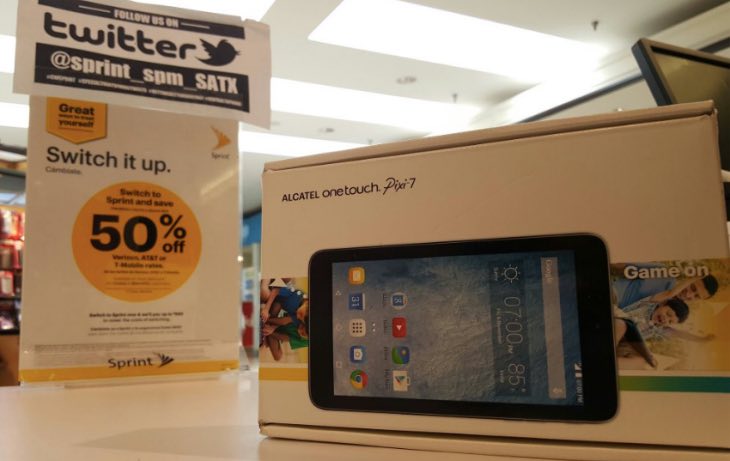 How good is the free tablet though? The Sprint Alcatel Onetouch Pixi 7 tablet specs include a 7-inch display with a 1024 x 600 pixel resolution, 4G LTE, 1.1Ghz quad-core Snapdragon Qualcomm processor and 1GB of RAM.

There’s a 5 megapixel rear camera on board with 8GB of internal storage and MicroSD card support to expand upon this further.

Sprint’s One Touch Pixi 7 tablet runs on Android 5.1 Lollipop too, while battery life is decent enough with a 4,000mAh battery under the hood.

These specs for Sprint’s version are clearly upgraded from the original Alcatel Onetouch Pixi 7 tablet, which basically had downgraded specs in all areas.

Sprint are giving this away for free right now, let us know if you took advantage of the deal and leave your thoughts below on what you think of the new tablet.