A lot of FPS games are coming out at the moment, and Homefront is one of them. It is tipped to be one of the biggest games to come out of this first quarter so OnLive have decided to give away their games system free when you pre-order Homefront.

This is a smart tactic says Slashgear, and if it goes to plan, it stands to put OnLive’s games system in a lot of hands, more hands than it would otherwise. The offer is available now, all you have to do is pre-order the game before March 14th and the games console is yours. They normally sell for $99 but the only money you have to spend will be $49 on the game itself.

This not only gets you the MicroConsole free but also grants you access to THQ’s Metro 2033 game. Homefront is set in the future where the U.S has been taken over by North Korea. It is the player’s job to then fight and take back the occupied parts from the North Koreans. 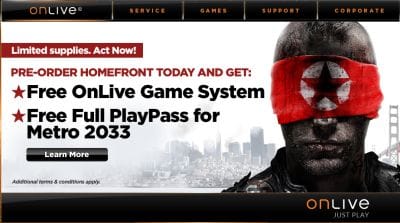 With this giveaway gamers will be able to experience OnLive’s servers or ‘cloud’ by streaming games to the OnLive MicroConsole which allows games to be played at 60fps on their HDTV or computer. They currently have over 70 game titles in their library and the more they get the more competitive they can become in the games industry. For more information on OnLive read the article about this deal over at GamesBeat.

Check out more information about the deal over at OnLive.com where you can also see what other offers they currently have available. What do you think of this offer? Will you be getting Homefront? Let us know what you think.