If you haven’t heard about the Forza Football app, then you can see two iPhone screenshots side-by-side below that feature Manchester United Football Club along with Chelsea FC, Everton, Arsenal, and others in what seems to be a slightly older picture not changed with the latest version 3.1.1 update.

This app provides transfer news and live scores with notifications, although a few users complained about being bugged too much with these updates and wanted a setting to stop them. This is now possible within the latest July 2014 update, which will allow you to “remove notifications for transfers” and even stop the strange sound when transfer rumors arrive.

The main features of this free iOS app will be joining in the debate with opinion polls, getting live scores, and breaking news about transfers for Arsenal FC, Everton, CFC, LFC, and plenty more with news from over 420 football leagues. 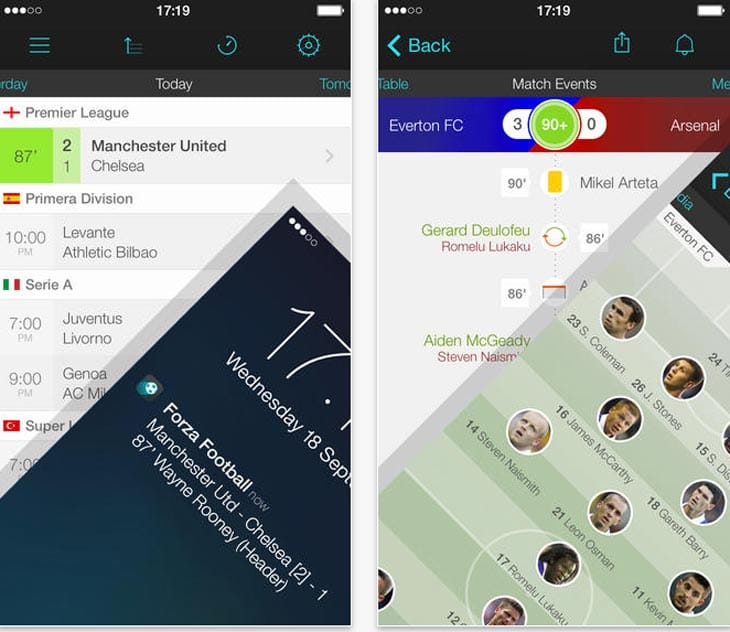 Apple iPad users get a view dedicated to the increased screen size and you can see what we mean within another screenshot below. This showcases a lineup for Paris SG vs. Chelsea, and also a live table, media, and stats for the game while it’s happening.

Are you happy to see the Forza Football iOS app receive this update for notifications? It’s great getting the news, but some of us like to open the football app ourselves rather than be bombarded by notifications.

We just installed the app from iTunes on an iPhone 5 for a quick look and we’re impressed with the news updates. There’s plenty of transfer rumors like Didier Drogba thinking about a Chelsea return, Man Utd agreeing on Dortmund for Hummels, QPR will send Remy to Liverpool, and Arsenal looks like they’ll get Khedira by beating Chelsea. Let us know how you get your football fix while mobile in the comments.