It looks like a major piece of Forza 6 DLC has leaked and we all have Amazon to thank for it, not for the first time. We now know that Forza 6 Porsche DLC is coming and now we have price and release date details to share.

Microsoft nor Turn 10 have announced anything, but this appears to be the most clear cut leak we’ve seen from Amazon. The new Porsche content will allow players to customize 20 Porsche models, nine of which will be ‘brand new’ to Xbox One. 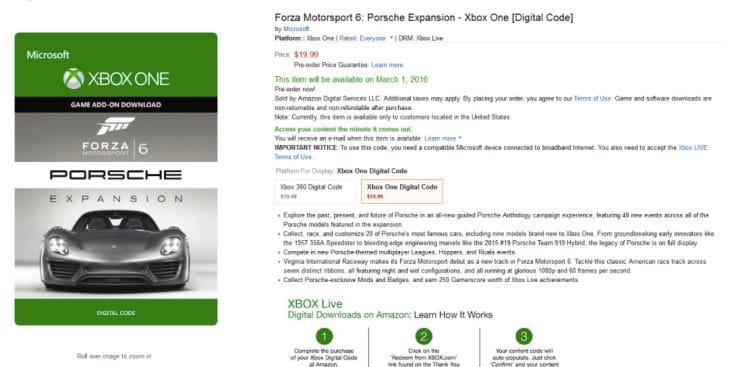 On top of this, there will be 48 events featuring the new Porsche models and a new Forza 6 track as well with VIR confirmed! – Otherwise known as the Virgin International Raceway track, which has been a big request from fans in the past.

Finally, the leak has also been generous enough to state that the Forza 6 Porsche DLC release date will be March 1 2016 and the price will be $20.

What are your thoughts on the content – will you buy this for $20 or not? We’ll let you know once we have official confirmation and a teaser trailer.