As expected Nintendo unveiled Fortnite for Switch at E3, but the big surprise was that it was available to download immediately much to everyone’s delight.

For many gamers though sadly, that delight has turned to sadness after discovering that Nintendo Switch accounts are being blocked for anyone that has previously played Fortnite on PS4.

It has now been confirmed that while Fortnite on Nintendo Switch supports cross-play on Xbox One, PC and Mobile, PS4 is unsurprisingly left out of this list. But the kicker is that your existing account containing purchases, friends list and hours of progression is gone too as Sony doesn’t appear to be letting anyone carry on where they left off on Switch. 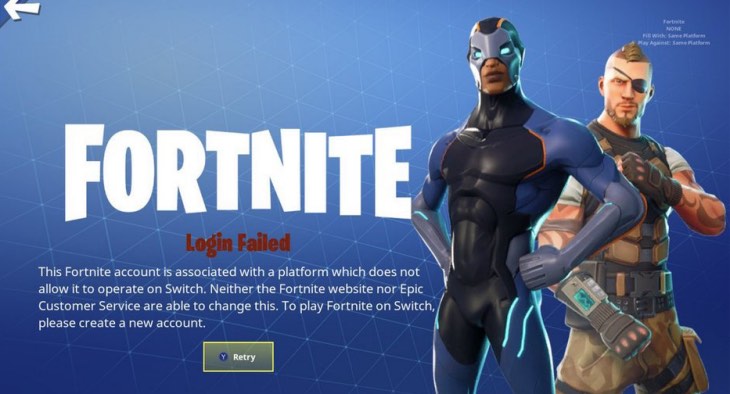 The above screenshot shows the error that you will get whenever you try to play Fortnite on Nintendo Switch if you have previously tried Fortnite on PS4.

As you can imagine, this hasn’t gone down well at all and here is just some of the reaction from social media at the moment.

I don't even care about Fortnite, but this is absolute garbage. If your Fortnite account has EVER been logged onto the PS4, you can't ever play on Xbox One or Switch, not even by unlinking your account. pic.twitter.com/OuhtlPmTTv

Hey @AskPlaystation you guys have about 24 hours to unlock my EPIC games account so I can sign into Fortnite on the Switch before I start cancelling my PS4 pre-orders. #FortniteSwitch #ps4 #sony #nintendo

Since @Sony is apparently blocking #Fortnite cross-play between PS4 and Nintendo Switch, I will be switching to Xbox One as my non-Switch platform of choice so that I can team up and play with my kids. I recommend anyone who can do the same.

Sony nor Nintendo or Epic Games hasn’t issued an official statement on the matter but we have a feeling that they might soon as the backlash is extremely fierce at the moment.

The only option Nintendo Switch owners have right now if they have played on PS4 is to start from fresh which obviously is a very hard thing to accept.

What is your reaction to this? Many gamers are accusing Sony of being ‘anti-gamer’ – do you agree with this?