We are once again at another annual event in Forge of Empires, it’s time for the Halloween 2015 quests list to be discovered for those wanting a Mad Scientist’s Lab building as the reward after completing 14 quests at one per day. While there’s 14 riddles from Jack O’ Lantern, you won’t be able to complete all tasks in one day like previous years due to a countdown clock making you wait until a new day starts for your next quest.

It was expected to see the first Decorate or die quest appear again like we had in 2014, although there’s plenty of other riddles and some are extremely different to surprise regular players along with the “Event Mission” structure this year. We are going to feature the full Forge of Empires Halloween quests list below, as we do each year with a simple list with answers and the event goes live to all on October 26, 2015. 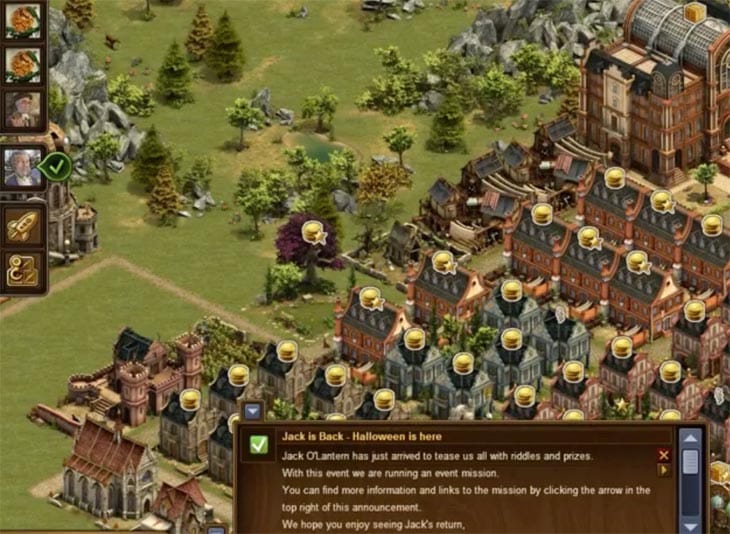 BOO! – The first quest is titled “Milquetoast” and comes with the riddle, “What the heck, it is Jack! My riddles you crack, you answer me back and get some knick-knack! Now, go build some stack”. You then do the normal “Decorate or Die” task like we see every year.

The answer is simply to build 5 decorations from any age, for us this was trees and then the Think It Through task is spending 7 Forge Points. We got 60,000 coins as the reward in Postmodern Era.

Fraidy-Cat – Go!, go!, go!, visit some friend, make him happy with a helping hand. To so thrice, that would be nice. The quest has a couple of tasks with random rewards that include “Smile or guile”, and “think it through”. The answer is simply 3x polish or spend 7 forge points and you receive a random reward, for us this was 20 diamonds.

Poltroon! – Titled Five by Four of Four by Five, and the riddle explains “that’s the goal for which you strive”. You then have a couple of tasks titled “Build or begone”, and “Think it through”.

The answer is to create a building of 4×5 or 5×4, and also spend 7 Forge Points once again. This gives you a random reward and for us, we received 5 Industrial Filters.

Sleeves Up! – This event quest is titled Mollycoddle, and the riddle asks “Roll up your sleeves and get on with it! Producing 15 times 15 is what I see fit”. The answer is to go to production buildings and produce something for 15 minutes, but obviously do this 15 times, so hopefully you have a number of these buildings to get the job done quicker.

Once again, the second tasks is to spend Forge Points again. It looks like this Halloween event wants players to keep spending points.

Polite Seizing – Titled Weak Kitten, and with a riddle mentioning “If you please, three times you seize. You can also be nice, but that has a price. Inventing something, to be precise”. There’s 3 parts of “Seize or science” and 7 for “Think it through” tasks. In a nutshell, the answer to this is you need to plunder 3 times for seize or research a technology for science. 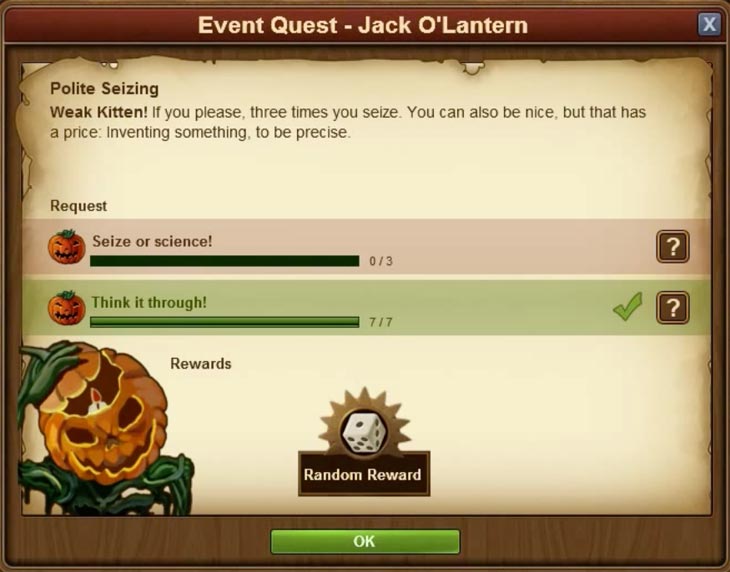 Cowardly Custard! – This quest is titled Land or Loser and the riddle has a simple way to be completed, although it can take a little time, as you need to conquer a Province and not just a sector. The loser part might not be a task, instead you will just lose if not completed. As with other tasks, you also need to spend 7 Forge Points and receive a random reward.

Pantywaist! – Titled Explore or extinction, you are required to Scout a province and as per normal spend Forge Points and receive a random reward like the other tasks.

Brave Chicken! – Quest 8 is titled Construct or constrict and other than spend points, you will need to build a goods building, a production building, a cultural building, a residential building, and a military building. Finish this task off by also building a piece of road and decoration from any age.

Yellow-Belly! In Quest 9 you will find a task called “Acquire or annihilation”, which to solve you will need to simply negotiate a sector for a random reward.

Daring Dastard! Titled Spend or spare and with a riddle, “I grow by the hour and increase your power: I pay your inventions and Great Building intentions. Now here is my plea: Spend a day’s worth of me”. The answer is simple, just spend 24 forge points to complete both tasks at the same time.

Foolish Fool! – Riddle or remorse is found in quest 11, the answer in the main task is to build a Pottery, as seen in the riddle “where you and your 40 brothers work”.

Invertebrate! – The main task is called Sneak or peek, and this is one of the easiest to understand due to the riddle mentioning “you want to take a sector and make it quick” and “so before you start pay some coins”. The solution is simply to infiltrate a sector.

Lord of Misrule! – The Delete or doom task is the first to come with a named reward. This is to choose between two Halloween Portraits. The main part of this riddle asks you, “Manage your army and if you want to thrive, boot one from the middle of the five”. The answer is to delete a light unit.

Lord of Misrule! Sell or sorrow is quest 14 and the final from the Halloween 2015 event. You will need to sell a graveyard if you own one, if not then just sell three buildings or roads from the age you’re in.