The current version of the Ford Taurus is only two years old, but Ford has just show cased the 2013 model. The new model made its debut at the ongoing 2011 New York Auto Show.

An article over at autoblog by Steven J. Ewing is reporting that the latest version of the Taurus has a more aggressive look to it. This is for the base Taurus and also the high-end SHO. Ford has even admitted that they used Audi’s A6 as a benchmark when designing the new model.

In the non SHO Taurus you will find the new 2.0liter EcoBoost inline-four, which is reported to be capable of 31 miles per gallon on the freeway. You also will have the choice of the 3.5-liter V6 which is now capable of producing 290hp.

The power plant in the SHO has been left untouched, so the EcoBoost V6 still produces 365 hp with 350ps of torque. Ford has tinkered with the brakes though and put in a bigger master cylinder, which is claimed will improve the feel and response. 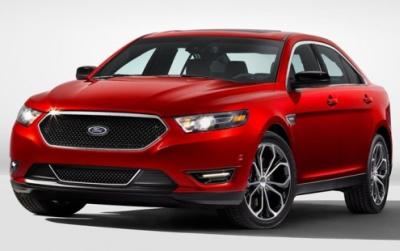 The 2013 Ford Taurus is expected to hit showrooms during the first half of next year. Use the link above to see more images of the 2013 Taurus.