Who would have thought that one day we would see a Ford 3-cylinder engine make it to production? Well it seems that the Blue Oval is improving fuel economy for the Fiesta and Focus. They will both get this smaller 1-liter engine, which will also come with EcoBoost and an 8-speed transmission. We should expect to see the new powerplant in production models in the next couple of years.

Ford had not announced which models will get the new 3-cylinder engine, but The Detroit Free Press believes that the Fiesta and the Focus are the most likely candidates. However, it seems that it will only be available for the U.S. models for now; at least it is good to see the country slowly moving away from those huge engines that drink the fuel like it was going out of fashion.

Having said that, the three-cylinder engine has been in the European market for sometime — although not any by Ford. We can still expect this new engine to be available throughout the world in the coming years, and it will be expected to produce as much power as a standard 1.6-liter 4-cylinder engine. What makes this so special is that it will not only be more fuel-efficient but also lighter as well. 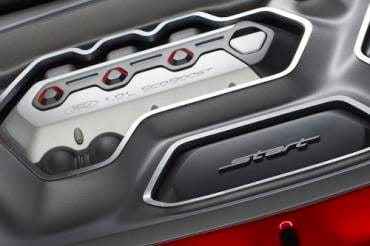 It is not only down to weight though; the 8-speed transmission also helps to improve efficiency, as each gear change is done with almost seamless shifts. It does seem as though Ford still has a few tricks up its sleeves to offer an alternative to the hybrid.