If you fancy yourself as the next Sir Alex Ferguson or JosÃ© Mourinho you may be wondering when the next Football Manager game is coming, well today we cannot confirm a definite Football Manager 2012 release date, however SEGA has confirmed that this PC exclusive will be coming to PC before Christmas, this year.

Sports Interactive, the game’s developer, seemed keen to promote the upcoming release and we have to say that after reading a recent VG247 article we have high hopes for this year’s Football Manager installment. We are told that this time lots of improvements have been made, in our brief article we will highlight what we believe to be the most important / impressive changes.

Let’s start with visuals, yes we know that graphics aren’t all that important in management games, however if we start by telling you that the game features a new layout system which allows more content to show on high resolution displays you will understand why such a change has been made, we are also told that you will have access to new tactics and overviews screens along with customizable columns – new filters have also been mention as well, but no specifics have been revealed. In terms of graphics we are told that the 3D match feature will now boast more stadiums, new camera angles, better weather effects and “a whole new crowd system”. For those of you who are interested the two news views are Director Cam and Behind Goal. You can see a video showing the game’s new match engine here, below we have embedded a screenshot showing snowy conditions. 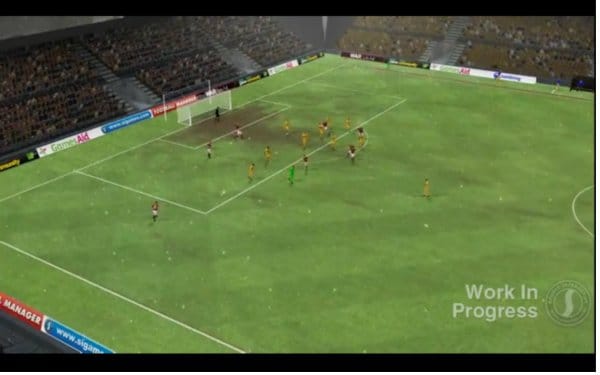 In terms of winning games there will be a lot more at your disposal to get the most from your players, you will be able to add tone to you team talks etc to perhaps give your players a “kick up the proverbial” at half-time, also scouts can now deliver in-game reports which should help you combat your opponent’s formation / tactics.

Finally we must reveal that players new to the franchise will have a separate tutorial to complete to bring them up-to-date with the game’s many features, once you’ve done this you can start your management career!

We like the sound of Football Manager 2012, do you?