A useful application which will notify you of any flood warnings has just been released. Flood Alert 1.0 will give users real time flood warnings near to them, and at locations across England and Wales.

Developed by the Halcrow Group LTD, the app uses the latest technology available and Halcrow have been licensed by the Environment Agency to be a flood warning service provider.

Currently over five million people in England and Wales are at risk from having their home or work premises flooded from rivers or the sea.

Users can quickly and efficiently monitor flooding in areas that are important or close to them. There are additional feeds for river levels, sea conditions, and rainfall once they are made available by the Environment Agency. Flood Alert will allow users to set two defined locations such as your home or family’s residence to get live status updates. 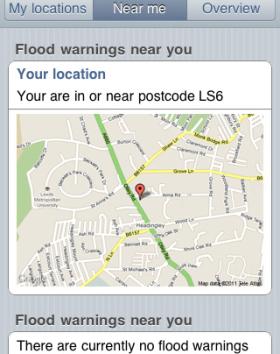 Flood Alert 1.0 is available free of charge on the App Store. Requires iPhone, iPod Touch, and iPad with iOS 3.0 or later. There will be a version for Android owners later in the year.