See the update at the bottom of this article, the Flappy Bird app has been taken down and cannot be found in the App Store search or downloaded. You will also notice that the url missing and page is broken for Google Play, so there it has been removed from both iOS and Android stores. Those of you that love this game should not uninstall it, or it will be lost forever. It is worth noting the ads still work for those that installed the app, so the developer is still making money as far as we can tell.

The original article – The Flappy Bird taken down time passes and we are yet to see another tweet by Dong Nguyen since the now famous statement of everything getting too much.

It has been 22 hours since a tweet explained the Flappy Bird will be taken down and we have just checked both Google play and Apple’s App Store, but the Flappy Bird app hasn’t been removed from either Android or iOS. It is not clear why the 22 hour time was important to the games developer, but this amount of hours has only just passed since the announcement.

You can read more about the tweets this “passionate indie game maker” made almost a day ago, in this article, although clarification came after that statement in regard to why Flappy Bird is being taken down. Some people thought it was due to a sale or legal reasons, but the Dev explained “It is not” due to either of these common assumptions.

Games will continue to be made by the indie developer from Vietnam, although it is not clear what the future holds for Flappy Bird after it’s taken down. 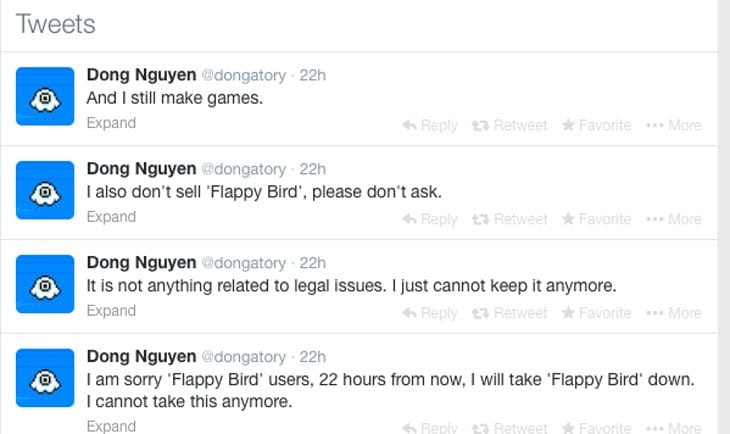 It should be noted that when uploading apps to Google play it can take just a couple of hours before the app is live, although Apple’s iTunes Direct can take up to a week during the review process. It is not clear how long it will take for Flappy Bird to be taken down after Nguyen pulls the app, so feel free to leave a comment below if you have more details on this process for either Google Play or the Apple App Store.

Update: Flappy Bird has been taken down and cannot be found in the App Store search anymore, although if you have it installed the app will work. You cannot download it anymore.

Update 2: The URL for Google Play is now broken and replaced with “We’re sorry, the requested URL was not found on this server.”, so the Flappy Bird app has been taken down on both iOS and Android now. RIP.