The Flappy Bird app will be gone from iPhone and Android within the next 24 hours, although it is not clear if those that already installed the popular game will still be able to play after Sunday.

This news comes directly from the Flappy Bird app developer that saw thousands of people talking about their record score using the app, comparing screenshots, uploading gameplay videos, and just spreading the rapid success to new highs each day.

Dong Nguyen has been dropping hints for a while now and around 15 hours ago we saw a tweet explaining the Flappy Bird app, “ruins my simple life”. The impact has been so great that the same tweet also stated, “So now I hate it”.

In the last 3 hours Nguyen’s Twitter account followed with the biggest blow of all, which made it clear that the Flappy Bird app will be gone from Apple’s iPhone App Store and Google’s Android Store within the next 24 hours. The tweet read, “I will take Flappy Bird down” and that everything has become too much, although exactly what that is might still be a mystery. 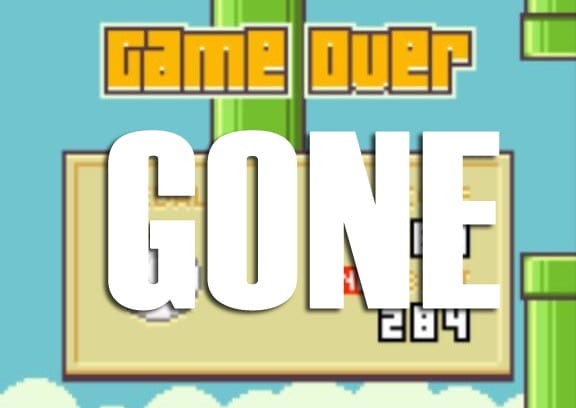 Flappy Bird app gone from iPhone, Android – If you are reading this article on late Sunday, then there’s a good chance you will find the Flappy Bird app missing on both Android and iPhone. This is of course dependent on how much we should trust the developers word, because Twitter can sometimes deliver tweets in the heat of a moment and later be deleted.

We will update Product Reviews readers when the Flappy Bird app finally is removed from both app stores, and considering the last tweet landed just a couple of hours ago stating “I’m still taking the app down”. It looks like the developer will be going ahead with the decision.

If you are thinking of putting in an offer to purchase the Flappy Bird app, then forget about it, as Nguyen explained it isn’t for sale.

Will you be sad to see the Flappy Bird app gone from iPhone and Android app stores?

UPDATE: The Flappy Bird app has been taken down.