As we told you earlier on, EA DICE unleashed a huge patch update for the PS3 version of Battlefield 3, following on from a similar patch update for the PC platform last week. We’ve noticed that many of you are complaining about the fact that there are empty servers after installing the update, but we have a quick fix for you which will solve the problem.

If you haven’t read the official patch notes for the update, it is a good idea to spend five minutes and read through the whole change log as there are many changes which affect key aspects of gameplay.

You’ll probably notice the new squad improvements that DICE has made to the game, while at the end of each round you’ll also notice the fairly large text that now displays the round durations as well as the ticket score for each team.

As for the no servers fix that most of you are probably complaining to DICE about right now: For some reason, DICE has selected the Back to Karkand maps as default in the server filter list. If you press R3, you’ll see that the four upcoming maps – Wake Island, Sharqi Peninsula, Strike at Karkand and Gulf of Oman are selected, while all the other normal maps are not.

All you have to do is untick the Back to Karkand maps and your server list should refresh as normal allowing you to get back to playing. Don’t ask us why DICE has selected these maps as default, perhaps it was a mistake on their part, but at least there is an easy fix and it is nothing serious to worry about. 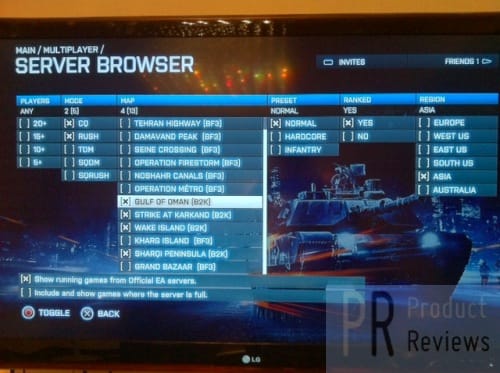 Let us know if this fix helped you, or if you are still having problems with Battlefield 3 after installing the huge 700MB+ patch update. Perhaps more importantly – Does the game play better for you or worse?