The manufacturing of low carbon equivalents to regular combustion engine vehicles is beginning to be favored by some companies today, due to a new demand for them. Until the facilities for these electric or hydrogen-fuel cell powered means of transport get common refueling sites however, they will not reach their full potential. This is why Honda has decided to open their Swindon manufacturing site up as the first hydrogen refueling station in the UK.

The company is set to release their FCX Clarity, which is a hydrogen powered vehicle, and in the buildup to its release it seems they have opened up this station in order to spark the manufacture of more similar service stations. The Swindon station will be run by industrial gas experts BOC, a partner of Honda’s, who also are responsible for building the station.

The refueling station, which is now fully-operational on a commercial scale, will be accessible to users of hydrogen-powered vehicles and those who are developing them. It will provide the two most common hydrogen power systems filling pressures, 700 bar and 350 bar. It is situated on the M4, halfway between Swansea and London. It uses technology that is easily mimicked so a network of similar stations can be established eventually. This way they can spread across the country so as to offer a more common service for more hydrogen fuel-cell powered vehicles.

According to ExpertReviews, Honda’s Thomas Brachmann claims that ‘Hydrogen fuel cell technology is the ultimate transport solution,’ adding that they meet environmental demands from customers at the same time as providing the performance and range that is expected. Honda’s hopes are that this scheme can provide a blueprint for future plans to build stations for these types of vehicles.

What are your thoughts on low carbon vehicles? 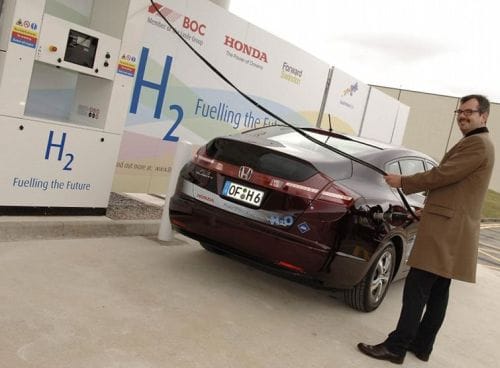