Apple is on a roll today because having just released iOS 7.1 to the public for the iPhone 4 and above and the iPod touch and iPad, they have also updated the OS for the Apple TV to version 6.1, which is its first for 2014. We know that the new features are not going to make you stand back in amazement, but there are several features that have been demanded by users.

One of those much-needed features is the ability to hide unnecessary channel icons from the home screen, this was possible before, but you had to go into the Parental Controls menu first. This added feature allows you to customize your Apple TV even more.

How to arrange or hide icons — This is a very simple process because all you need to do is go to the main menu, press and hold the Select button on the remote until you see the icons jiggle like they do on your iPhone or iPad, you can then move these icons with the directional buttons.

There are more options available, which can be accessed with the Play/Pause button. 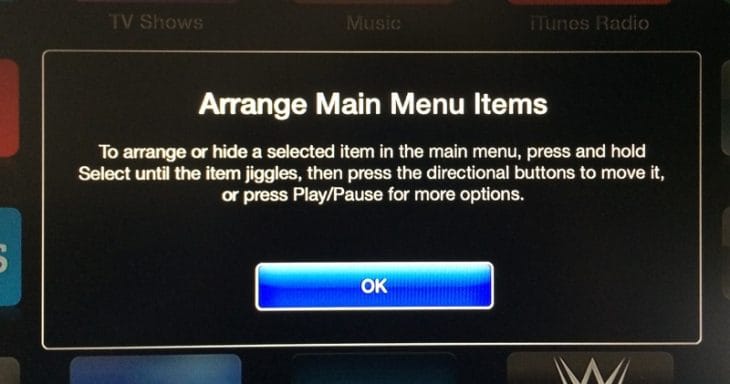 In order to download the latest Apple TV OS you will need to go to Settings, then General and Software Update. Like we said above, this is a much-needed update, but what we would really like to see is a new version of the Apple TV, which will be the 4th-generation model.