Mozilla have always been the go-to browser for most computer-savvy users since they realised Internet Explorer was not the only browser out there. Google have also stated a huge market share increase with their Chrome browser significantly making progress over the last year, and Mozilla have took notice. The Firefox company have started putting work into their latest browser that is currently in beta form, with an interesting feature called ‘Tab Candy.’

Creative lead designer Aza Raskin has released a video detailing how ‘Tab Candy’ works, and what you can use it for to benefit you.

In short, Mozilla have realised that if you have multiple tabs, it can make your workspace rather cluttered.

Tab Candy rectifies this by using tabbed browsing management and organisation, where you can ‘group’ specific tabs into sections by using drag and drop, even using text to name and scribble down notes for future reference.

For instance, you could have one group called ‘Email’ that would have all webpages corresponding to personal email address like Gmail, Yahoo, Work, University and Hotmail. Other group suggestions could be ‘Shopping,’ ‘Fun,’ ‘Social Networking,’ and ‘Gaming.’ 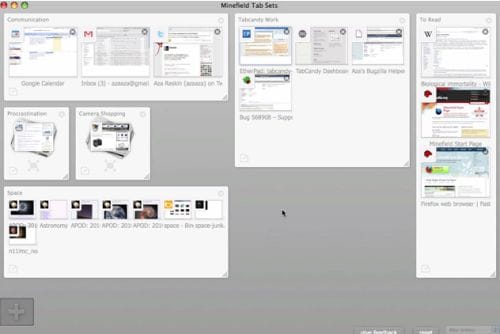 There is also a sharing option where you can share your layouts, & saved webpages with linked friends, and they can share it with you. You can put these friends shared layout within your own layouts too.

All sounds pretty nifty, but for the moment Mozilla are only using this platform as a prototype, so whether it will make the final version is not known.

I guess an easier way for me to explain is to show you a video of said feature. Scroll down to the bottom of this post to see the video on ‘Tab Candy.’

Microsoft are also working on a new release of Internet Explorer with version 9 in the pipeline. An apparent screenshot has been leaked and does not show any form of evolution with the tabbed section of the browser.

I for one think that it sounds like an interesting feature, and probably something I could use as long as the layout could be saved for future reference. Even syncing it with Mozilla to use on other PC’s would be beneficial.

How does this feature look to you? Would you use it?