Moments ago, we told you that the Twitter accounts for LizardSquad and LizardPatrol had been suspended as of December 11. Now, after doing some digging it looks like another group called ‘FinestSquad’ are directly claiming responsibility for taking LizardSquad offline.

As evidence of this, they have allegedly gathered personal information of all of the LizardSquad members responsible for the recent attacks.

They have also issued an ‘apology’ on behalf of LizardSquad if gamers were personally affected by the attacks from the ‘kids’ as they highlight on their website. 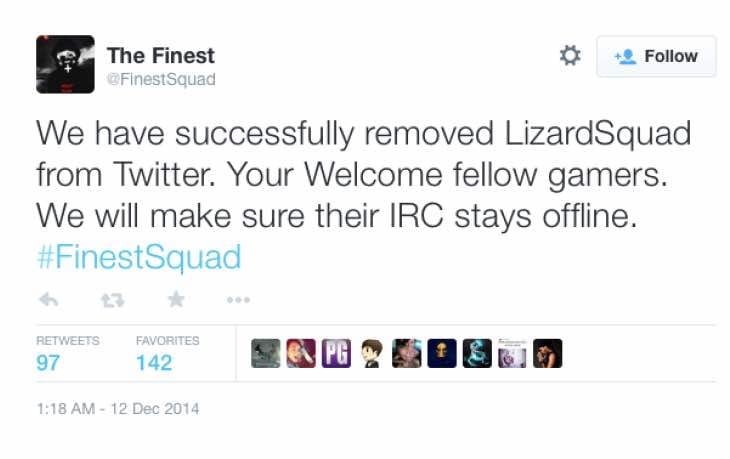 Above is a recent Tweet from the group saying that they are also working to keep LizardSquad’s IRC channel offline, for the good of PS4, PS3, Xbox 360 and Xbox One gamers worldwide.

While we obviously can’t verify if they are directly responsible for bringing LizardSquad to justice, it’s obviously refreshing to enjoy the PSN and Xbox Live without further interruptions.

There had been some social media build-up on a potential LizardSquad Vs Anonymous battle that was apparently in the making, but this other ‘FinestSquad’ group appears to have taken matters into their own hands by claiming responsibility for the fact that LizardSquad has been caught.

Either way, we just hope it means that there will be no DDOS attacks in the build-up to Christmas. Have you been following the whole situation on Twitter?

Let us know thoughts on this and if you are thankful to FinestSquad if they have really managed to take down LizardSquad for good.