A recent benchmark test on several handsets running the Qualcomm Snapdragon 810 SoC has forced HTC Communications Manager Jeff Gordon to share a tweet because of what he pretty much says is an inaccurate test on the HTC One M9 smartphone.

There had been some early reports that suggested that the processor mentioned above was causing some overheating issues, and so Tweakers took it upon themselves to come up with its own test and found that the HTC One M9 got the hottest, 130 degrees Fahrenheit or 55 Celsius to be precise. 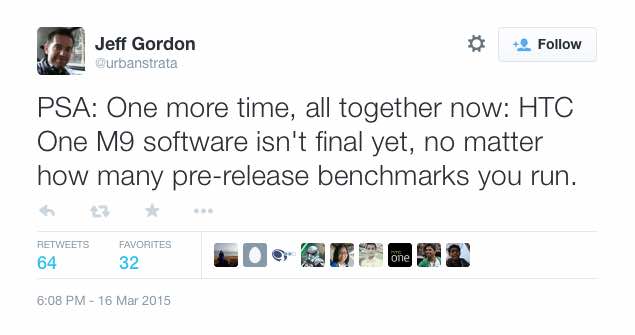 However, Gordon reiterated in his tweet that the software being used on the HTC One M9 review units are not final, and so people should not take any notice of these pre-release benchmark results.

It’s easy for him to say that, but it is certainly a worry, especially as we are now just two weeks away from its release.

We can see why HTC would take to Twitter because we have already heard from several Product Reviews readers saying that they may hold off their purchase of the One M9 because of this overheating issue. However, we would advise you hang on and wait and see what the benchtest results are once the final release software has been installed.

It’s all very well running a stress test on handsets, but it’s also worth noting that these are not reflective of normal day-to-day use, and so the handset is never likely to ever get that hot. We also know that a change in software can help reduce high temperatures, so let’s wait and see what HTC does with its final software release shall we.

Speaking of the HTC One M9, there are signs that we could finally see the 64GB model that consumers have been hoping for.