If you already have your copy of Final Fantasy XV and wondering where to get the Season Pass, we have a heads-up for you on one amazing deal that we have spotted in the UK specifically.

So far, Square-Enix hasn’t gone into full details on what the Final Fantasy XV Season Pass DLC includes. They have however given fans a preview of what to expect in broader sense and it is as follows:

The Holiday and Booster packs will offer exclusive weapons and items, while the three episodes will offer new content based around the three main characters which you won’t get with the base game.

Perhaps more importantly, the Expansion pack will bring a brand new mode to the game and offer online co-op allowing you to play as Noctis, Gladiolus, Prompto, and Ignis together in a group with your friends – this could be worth the entrance fee alone. 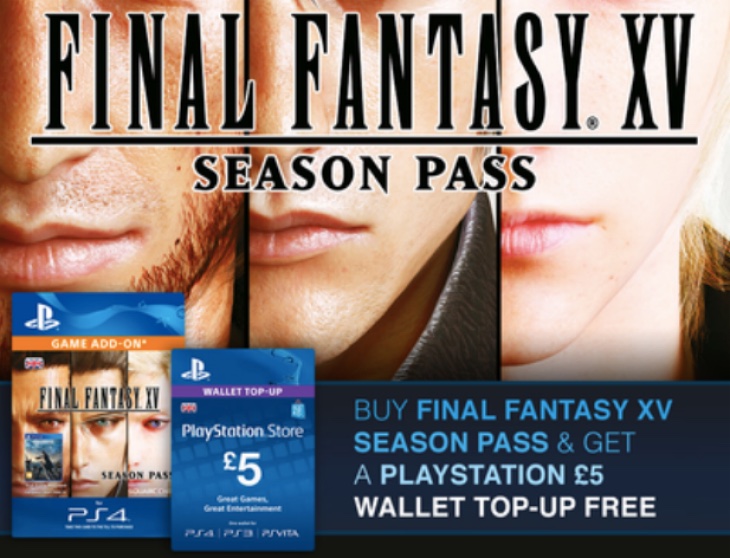 As for fee, the standard Final Fantasy XV Season Pass price is £19.99. Retailers Amazon and Game both offer for this price but the best deal that we have seen comes from ShopTo.net who are offering the pass on PS4 for £19.85 but it also comes with a free £5 credit for PSN.

That makes it hands down the best deal so far for the Season Pass, so you may want to buy this deal now before it expires. As far as we’re aware, the £5 credit will not expire so you can use it on whatever you want, whenever you want.

For those that still need to buy the game itself, the best price we’ve seen is from Amazon UK who offer the Day One Edition for £39.42 which comes with the Masamune DLC weapon.

Let us know if you manage to claim the free £5 PSN credit and also leave a comment below if you’ve spotted a better deal elsewhere.