Square-Enix showed off yet another new build of Final Fantasy XV gameplay over the weekend, but we may have spotted something that fans were not supposed to have seen until later on deep into the quest.

The new footage was shown off at Twitchcon and part of the event was used to showcase a battle against new enemy Bandersnatch. Given that this beast was at a high level, Square-Enix made sure that the YouTubers who were demoing the footage were at a high level too.

As you can see from our screenshot below, there is going to be a sword for Noctis called Ultima Blade. It may not be the official ‘Ultimate Weapon’ though, as there is one with a higher attack power called the Balmung. 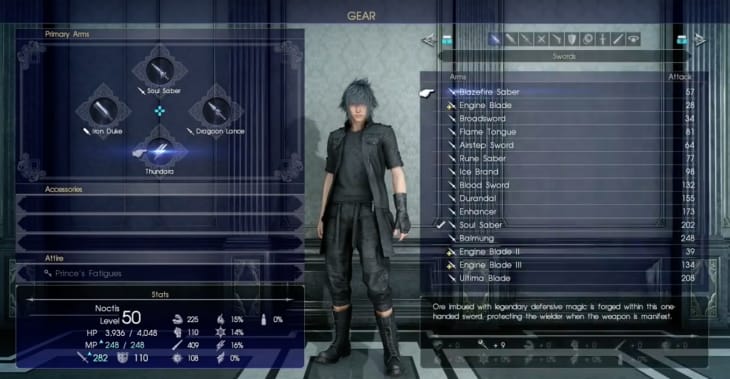 The Balmung has an attack power of 248, so is this going to be the best weapon for Noctis in FFXV under the swords category?

It’s important to bear in mind that Noctis can use other types of weapons such as spears and two handed swords so this is likely just going to be a sample of the high-end weapons available towards the end of the game.

Other weapons revealed in the slip up include the Durandel, Enhancer, Soul Saber and the Engine Blade which has a I, II and III version.

Let us know your thoughts on this juicy info below, do you think the Ultima Blade could be Noctis’s best weapon with a unique ability attached to it?