With Final Fantasy XIV due out on PC in a month’s time, it will be the next Final Fantasy title in the franchise which will make use of monthly subscriptions fees. We have the confirmed price you’ll have to pay per month – we want your thoughts on it.

Over on the official website for the game, Square-Enix has confirmed that users will have to pay out $12.99 for a 30 day subscription for the game. As far as I’m aware, there are no annual plans available yet, although that may become available after the game’s release on September 30th.

What are your thoughts on the price though – is it fair in your opinion? It is the same monthly price that Square-Enix still charges for Final Fantasy XI, so at least they haven’t increased it for the new game. Don’t forget that if you want early access to the game on September 22nd, you can pick up the Collectors Edition for $74.99, otherwise the standard edition will be out on September 30th, priced at $49.99.

Will you be subscribing to Final Fantasy XIV or not? Let us know your thoughts on this. 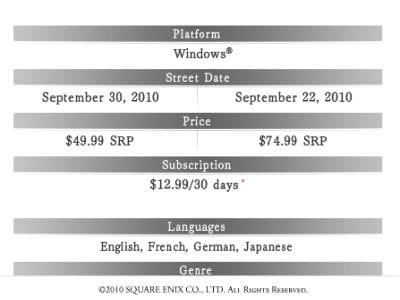