Following on from our article posted earlier this month, Square Enix has just announced the some details in regards to downloadable-content which is headed to Final Fantasy XIII-2. Today we can tell you a little about what this DLC will bring, the release date for Xbox 360 / PC and how much it will cost.

When you buy the Sazh: Heads or Tails DLC you will gain access to a fresh new episode of story-mode content. You will play as Sazh Katzroy and battle your way through a quest which runs parallel to the standard campaign. No further details have been divulged yet, but if you’re not clued-up in regards to Sazh you should check out his profile on the Final Fantasy Wikia. He is 43 years old, he stands 6 feet 2 inches tall and he has a distinctive afro. When playing as Sazh you’ll have access to two pistols (known as Vega 42s) and his cold blood skill, hopefully you’ll get your hands on his ultimate weapon – two pistols which are known as the Total Eclipses.

Not only will this DLC ad a new quest to the game but it will also add two new card games to the FFXIII-2 Serendipity casino, these are called Chronobind and Serendipity Poker – we don’t know the rules of these card games yet, therefore we will have to keep you posted.

The Sazh: Heads or Tails DLC costs just 400 Microsoft points when it hits Xbox Live on February 28th, it will cost £2.99/â‚¬3.59/$5 when it becomes available on the PlayStation Network on the 29th. As you can see it does come to the Xbox 360 a little earlier, we’re sue PS3 gamers will be pleased to hear that the exclusivity only lasts 24 hours compared to the months of exclusivity we’ve seen with other game DLC.

With less than two-weeks to wait for the Sazh DLC you don’t have long to wait, but we can also reveal that on February 21st new costumes will be available on Xbox Live and a day later for the PS3. There will be a Spacetime Guardian outfit for Noel and Beachwear for Serah, each will cost 240 Microsoft points on Xbox Live or £1.59/â‚¬1.99/$3 on the PSN. If you head over to EuroGamer you can see some screens etc, we’ve added an image showing the new costumes below:

Will you buy any of this DLC? 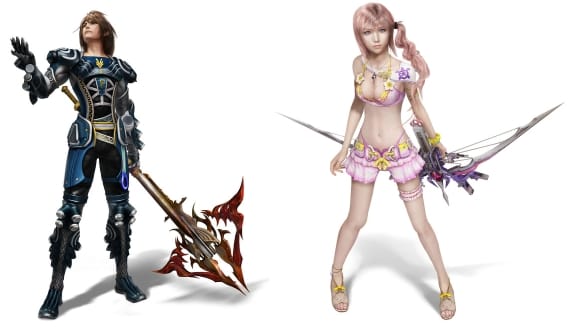