Final Fantasy XIII-2 has been out in Japan for a few days now, with Japanese gamers the lucky recipients of being able to play the game first before Square-Enix release the sequel to FFXIII next year in the US and Europe.

One trend that has become immensely popular with gamers is finding out which platform of a particular game looks best, since gamers have usually been left to discover themselves that not all versions of a game are exactly the same.

However, one of the first graphics comparisons has just been completed for the Xbox 360 and PS3 versions of Final Fantasy XIII-2 and you may be surprised to hear that there doesn’t appear to be any evident changes in graphics between the two, i.e – both versions are identical. This is a great thing of course, as those of you who played Final Fantasy XIII, will know that prior to that game coming out there was a huge storm involving the Xbox 360 version of the game and its graphics quality, compared to the PS3 version which graphic experts Digital Foundry concluding that the PS3 version of FFXIII was the more impressive version compared to Xbox 360.

Then of course, Square-Enix shot themselves in the foot by releasing screenshots of Final Fantasy XIII-2 running on the Xbox 360 back in the Summer of this year. The only problem here is that the screenshots were later found to be the PS3 version, and had just been photoshopped with the altered Xbox 360 control buttons.

So with those recollections firmly in our minds, we’re pleased to say that post-release comparison screenshots of Final Fantasy XIII-2 have now been put online by a Japanese website, and you can check them all out here, along with a translated description. As you can see, the shots are identical from what we can see, although the author of the Japanese comparison does make a point that there does seem to be a drop in quality for both versions of the hair featured on character models. We’ll let you be the judge of that aspect though as it doesn’t appear to be a huge problem for us. 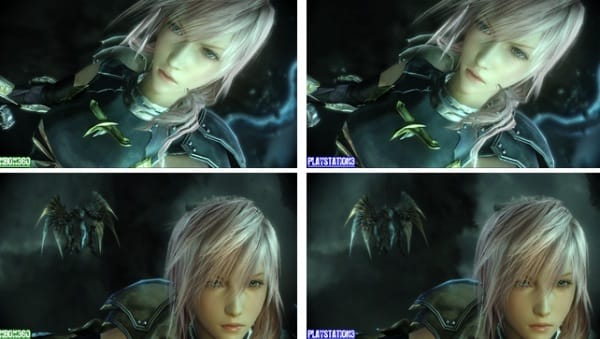 With the game releasing in just a few months over here, are you happy that both the Xbox 360 and PS3 versions of the game appear to be identical?