Time for today’s random story of the day, as we’ve just heard that Assassin’s Creed hero Ezio Auditore will be making an appearance in Square-Enix’ upcoming RPG Final Fantasy XIII-2, or at least Ezio’s costume will be.

In an unlikely pairing between Ubisoft and Square-Enix, Ezio’s costume from the recently released Assassin’s Creed Revelations game will be available in Final Fantasy XIII-2 as optionable DLC, according to a press release issued by Square-Enix.

Ezio is no stranger to jumping on board other franchises of course, as you may have read the recent news that he’ll also appear as a playable character in the upcoming Soul Calibur V game. And we’d also place a bet on him also appearing in the Sony’s super secret ‘Smash Bros’ game as well.

There’s no word on how much this will cost though, but we can confirm that Ezio’s AC gear will be available for Final Fantasy XIII-2 character Noel Kriess. Considering that there’s an official press release and everything, does that mean we can expect a similar move from Ubisoft in relation to a Final Fantasy XIII-2 costume DLC appearing in Assassin’s Creed: Revelations at some point?

You can take a look at how Noel will look with the new AC attire, thanks to an image below provided by Joystiq. Just as a final reminder to those that don’t know, Final Fantasy XIII-2 is due an imminent release in Japan and Hong Kong on December 15, but fans in the US and Europe will have to wait until February 3rd to get your hands on the game – a similar release strategy to the Sony PS Vita handheld. 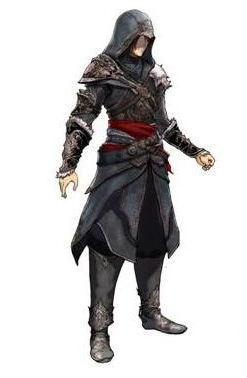 What are your thoughts on this random collaboration between Ubisoft and Square-Enix? Are you interested in picking up this costume for FFXIII-2 or would you prefer Square to focus on more pressing matters, like a FF7 remake for example?