The full game is already available to buy over in Japan, and while gamers are free to import at their discretion, playing the game with Japanese menus isn’t exactly an enjoyable process, even if the original Japanese voice acting is preferred to English.

With the demo release now available, you can get a sample of Square-Enix’ latest game, and find out for yourself if Square-Enix has made improvements from FFXIII. For those of you that don’t have the demo yet, it should be appearing today on the Europe and Asia PlayStation Stores as part of this week’s update. As for Xbox 360 owners, the demo should also be available on the Xbox Live Marketplace sometime today as well.

We can tell you that the demo will take place in the Bresha Ruins and puts you into battle against a giant monster known as Atlas. Two players are available in the demo, who are Noel and Serah. The demo will give you a chance to preview the new QTE elements that are now featured in the FFXIII-2 battle system. We would have liked a bigger helping of gameplay in the demo like previous titles, but you can’t blame Square-Enix for wanting to just offer a slice of gameplay in the hope that fans flock to pick up the full game at the end of the month.

Just to let you know, the demo comes in at just at under 2GB. If you have already had a playthrough of the demo, let us know your impressions of it. Is it significantly better than FFXIII, or are there still some aspects that disappoint you? 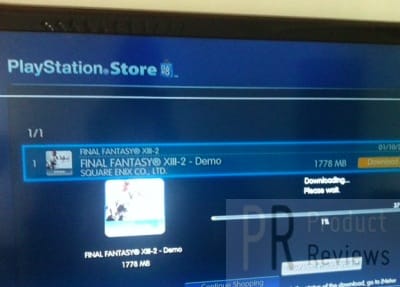