If you consider yourself to be a self-confessed Final Fantasy fanatic, then you definitely will not want to miss out on this. Japanese magazine Famitsu has just gone live with what looks to be the world’s first look at the Final Fantasy Versus XIII battle system.

As reported from VG247, Famitsu have four screenshots of the upcoming game in their latest edition of their magazine – two of which are taken from cutscenes, and the other two giving us a juicy look at how the battle system looks in the game.

It hasn’t been confirmed by Square-Enix yet, but it looks like the maximum number of characters you can have fighting at once will be three, since both screenshots show three characters in use. On the left hand side of the battle screen shots, you’ll see a few sub menus in play – these are Magic, Item, Summon and EX Play. 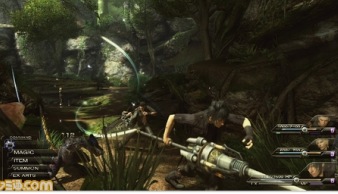 While the first three will be familiar to you, EX Play sounds pretty interesting and we’re looking forward to hearing specifc details about it. Is it related to a limit break type of system, or perhaps its a enemy skill, or hybrid move type of command – let’s wait and see. 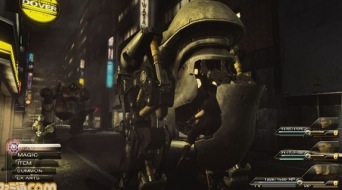 Check out the screenshots and let us know your thoughts on them. The graphics are pretty nice – we expected that, but what do you make of the battle system layout?