The day has finally arrived for PC owners now, as we are pleased to report that Final fantasy Type 0 HD for PC is now live on the Steam store.

You can pre-purchase the game for a discount for when the game unlocks in around 7 hours at the time of writing. See the listing here though to see for yourself that the game is almost ready to go.

The big talking point now though, is whether Final Fantasy Type 0 HD PC is 60FPS or locked at 30FPS. While Square-Enix hasn’t come out and categorically confirmed that it is 60FPS, it looks like the game will still be locked at 30FPS which may be disappointing for a lot of you. 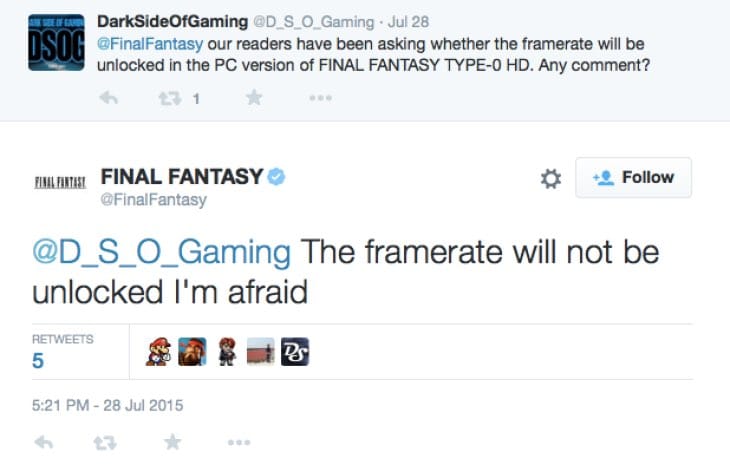 We know that some fans were only planning to buy the game if Square-Enix had unlocked the Final Fantasy Type 0 HD framerate to 60FPS to give PC owners a big incentive to buy at launch given the wait from console.

As you can see from the Tweet though from the official Final Fantasy page, this doesn’t look like the case sadly. Square-Enix says the framerate is still locked, so we can only assume that they mean 30FPS otherwise they would have advertised 60FPS prior to release.

Are you disappointed about this, or will you still buy the game? If you pre-purchase you can get the game with a 10% discount at $26.99 so let us know what you intend to do.