21 years ago Square released Final Fantasy III, now we can confirm that this game is being launched on the App Store for iPhone and iPod Touch, on the official Square Enix website is says it will arrive in March 2011.

If you never played Final Fantasy III “back in the day” you may want to check out Wikipedia, here you can find out full details regarding the plot and characters, we presume that the iOS version of the game will be quite similar to 2006’s Nintendo DS remake, Metacritic gave the remake a Metascore of 77/100, therefore the iOS release should be worth checking out. 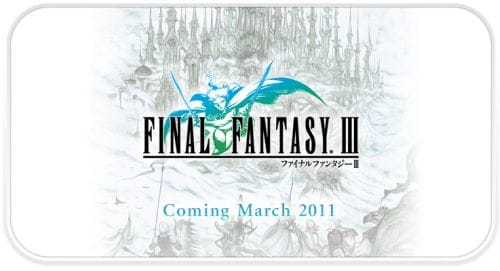 Hopefully we will hear more about this release over the next week or so, when we do we will keep you posted. Have you played the previous Final Fantasy games on your iPhone? If so, have you been impressed enough to buy Final Fantasy III?