If you are looking for a new RPG game to play, you’ll be pleased to know that there is a new Final Fantasy game coming out from Square-Enix. The publisher are releasing Final Fantasy Dimensions, but we’re a little disappointed to hear that this is only going to be coming out for mobile.

Considering that the PS Vita is pretty starved for titles right now, this would have been a perfect fit and just the PS ‘Mini’ style game that Vita owners could buy and appreciate before the likes of the Final Fantasy X HD remake and Phantasy Star Online 2 arrive.

Instead though, Square Enix has announced the game with a global release date of August 31 on iOS and Android platforms only. The game is going to be developed by Matrix Software and will be based on a series of Episodes. The game is already out in Japan at the moment and a few screenshots included here should bring back a lot of memories for those of you who have played Final Fantasy IV. 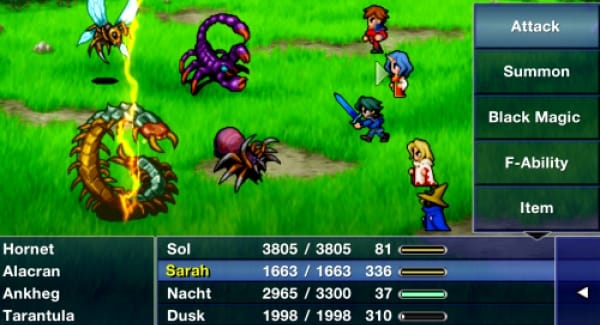 Dimensions looks very similar to FFIV and definitely wouldn’t look out of place on the Vita. Sony would be stupid not to make Final Fantasy Dimensions part of their PlayStation Mobile lineup on the Vita, although some of you may be questioning the pricing that has already been released for the game.

Square-Enix are charging £19.99 or $28.99 for the full game, although the prologue chapter is free and the first four chapters vary in price, with chapter one being the cheapest at £1.99 or $2.99. Considering that you can get a decent RPG fix on Android and iOS for less than $28.99, some of you may not want to cough up full price for this.

Still though, the prologue is free so you should check out the game when it releases at the end of the week. Do you agree that Square-Enix has missed an opportunity to put this up for sale on PS Vita? If they didn’t want the hassle of a full retail release, they could have least put the game on the PS Store for digital purchases.