We have some exciting news to share regarding Final Fantasy 7 Remake now, especially for those that consider Cloud to be their favorite character from the series.

It looks like it has been confirmed that FF7 Advent Children voice actor for Cloud, Steve Burton will be resuming the role and will voice Cloud for FF7 Remake too.

Strong clues on this were revealed on Twitter, as you can see from the Tweet below posted recently: 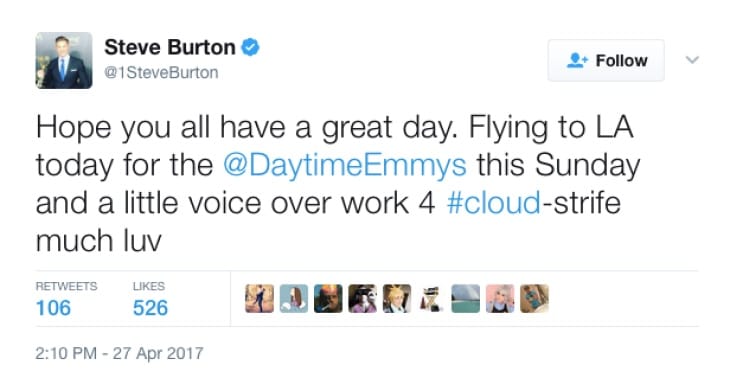 Other than that, Square-Enix has been very quiet lately on the FF7 Remake news front but something tells us that they are preparing something new to show at E3 2017 which would obviously be very nice.

Could it be possible that Steve Burton will be featuring in the next FF7 Remake trailer for E3 2017 with a bit of voice work for Cloud on show.

Are you still very excited about this game and looking forward to the next gameplay preview? Let us know what aspects of the game you want to see confirmed next.

For example, we would love to get a look at the remake of Gold Saucer!