It has now been roughly 18 months since the release of Fight Night Round 4, therefore it would be fair to say that a successor is long overdue, well the good news is that a recently released trailer shows off some impressive visuals for Fight Night Champion along with the official PS3 and Xbox 360 release date.

We have embedded the trailer at the end of this post, it lasts two minutes and shows a compelling-looking Hollywood-inspired career mode (aka Champion Mode), however does not show any gameplay footage, at the end it states that the game will become available on March 1st 2011. 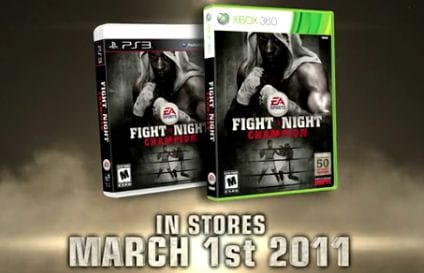 In previous Fight Night games the career modes have not been very exciting, therefore I must admit the gritty story line should be a fresh change to what has been quite a repetitive series, let’s just hope Fight Night Champion sticks to its roots in terms of gameplay and multiplayer elements.

If you are looking to buy Fight Night Champion you may want to pre-order it for some exclusive DLC, GameStop will give you the “100th Anniversary Everlast XP Boost Pack”, whilst Best Buy, Amazon and Wal-Mart will give you a young George Foreman in-game character, find out more here.

We have embedded the trailer below, what do you think of the seemingly career-centric release?