We have some good news for you Football fans who are planning to watch the FIFA World Cup in 3D. Sony and FIFA has announced a list of the matches that will be available in 3D. Bad news for England fans though.

As reported from Pocket-Lint, there will be a total of 25 matches that will be available to view in 3D courtesy of Sony. For fans of the USA team, you’ll be pleased to know that the match against Slovenia on June 18th will be available in 3D, but English fans will have to wait until the knockout stages in order to get the chance of a 3D match.

This could be due to the fact that neither the BBC or ITV have access to 3D-ready channels at the moment, meaning the only way to watch would be to head down to a 3D-equipped cinema or entertainment venue.

What are your thoughts on this? Full details over at Pocket-Lint. 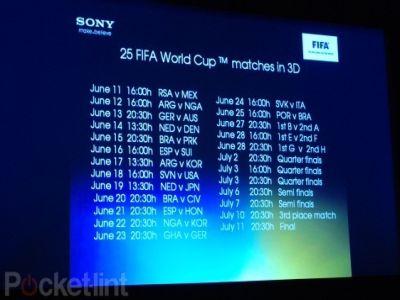