It’s no secret that two of the most popular football games of the year are about to hit the shelves, with FIFA 12 expected September 30th and PES 2012 October 14th. We have been bringing you news of the demo which was released on the Xbox 360 and PC yesterday. Another football game that seems to have gone unnoticed but is also due out soon is another EA Sports title, FIFA Street, due out early 2012.

The last FIFA Street title came out way back in 2008. This time it will be coming back with great improvement, seeing as the developing team behind it is headed by Creative Director Gary Paterson, the guy who turned the FIFA series around. It will also be using the same revolutionary Player Impact Engine as from the FIFA franchise so as to be as authentic as possible.

The features in the new FIFA Street include competing at 35 different locations from rooftop arenas and gyms to parks and parking lots in countries from all over the globe including London, Amsterdam and Rio. It also features over 50 all-new skill moves to use which is double the amount set to feature in FIFA 12. Each match will be entirely customizable so as to mimic the way that street football is played in the real world, whether its during futsal style matches, played indoors, Pannas, where the aim is to nut-meg an opponent or traditional 5 and 6-a-side, number of players and pitch sizes can be adjusted. 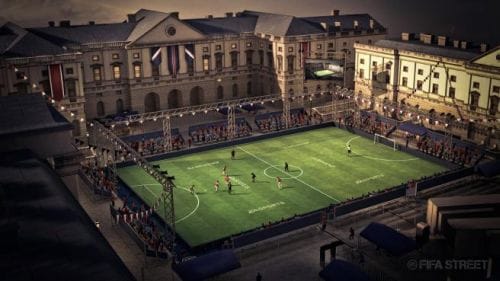 EA Sports Football Club will also play a major part in the new FIFA Street title, as it will for FIFA 12, as all the points gained during gameplay will contribute towards the Football Club identity. Check out our article on how the feature will work in FIFA 12 by clicking the link above. You can also check out the trailer below to get you in the mood for FIFA Street.

Are you looking forward to taking the beautiful game to the streets?