We have told you about the FIFA Official app for iPhone and iPad in the past, but with the 2014 FIFA World Cup in progress, we wanted to give you a quick heads-up on how easy it is to now use the app.

Previously, you may have left this app unused on your homescreen. However, FIFA’s recent World Cup update to the app has changed everything and it is now easier than ever to check important information such as World Cup Group Standings, World Cup schedules and so on.

Once you boot up the app, you will be asked to select your favourite team. Once done, you’ll be able to view this team’s personalized information in a separate tab which you can scroll across at the top of the app.

This page will list useful info such as squad players, results so far and the next match as well as which position that team is currently in. 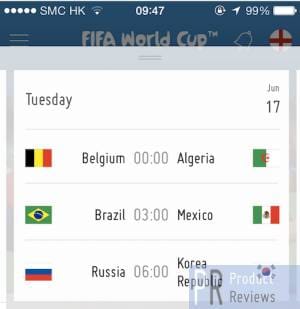 The most useful aspect of the app though can be found by simply swiping upwards on the app. From here you will get an instant heads-up on which matches are due to be played today but most importantly – World Cup kick-off times in your local area.

This makes the FIFA official app arguably the best around at the moment for World Cup news and the easiest to use in our opinion. It also means that you don’t have to spend extra time converting local times from Brazil into your time zone, which is obviously very handy.

Let us know if you have been using the FIFA official app on iPad or iPhone throughout the tournament and what you think of the update that FIFA has made especially for the World Cup.