However, we can still see that with less than one month to go until the FIFA 2014 World Cup start time, FIFA has yet to offer a big update to their existing FIFA for iPad app, with a specialized World Cup theme.

At the moment, there is no official World Cup app from FIFA, with FIFA revealing a while ago that they will intend to simply update their usual FIFA app with World Cup Brazil content closer to the event.

However, this hasn’t happened yet and fans may be starting to wonder when the updates will happen. Just to give you a reminder, here is what FIFA said in a press release last year:

“The official FIFA app will evolve over the coming months to provide an unparalleled digital platform to unite the hundreds of millions of fans for the 2014 FIFA World Cup Brazil.” 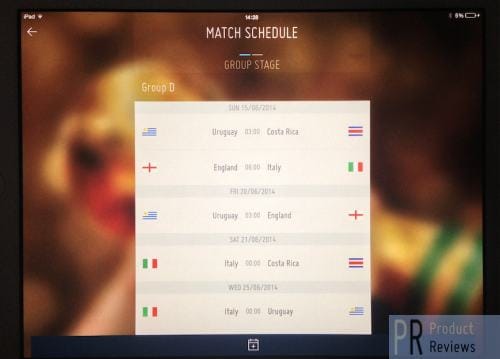 As you can see from our own pictures here, there is a World Cup section on FIFA for iPad which offers information such as 2014 FIFA World Cup Group Standings and fixtures.

This information may be enough until the tournament begins, but fans may be hoping for much more in June such as a live chat area, audio and video content from player camps, pictures of each team and also the final squad selections as well once managers make their choices.

Let us know if you have been keeping an eye on the FIFA for iPad app. Are you content with what is available right now, or are you hoping to see a bigger update once the tournament begins?