For those that are desperate to find out when the FIFA 18 Web App Early Start begins, we are pleased to bring you an official confirmation of this direct from EA.

The developer has given out some fantastic information this year, which will put an end to all of the false rumors about Web App start dates which you may have fallen for in previous years.

Thanks to this section of EA’s support website, we can confirm that the official FIFA 18 Web App release time will be on Thursday September 21 – we presume at midnight.

You can see the full schedule below: 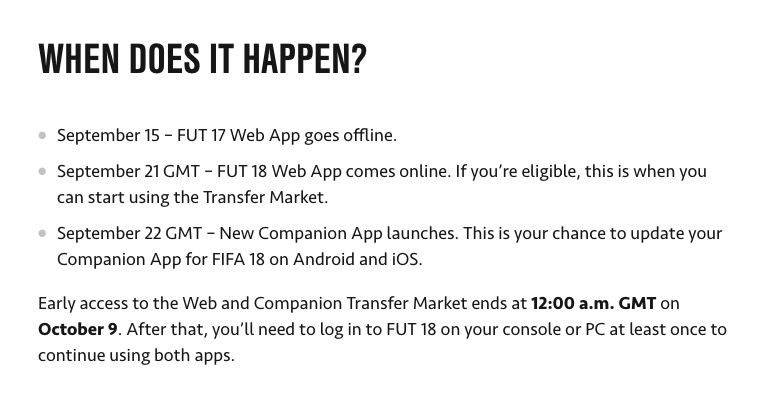 It also reveals that the download time for the FIFA 18 Companion App will be one day later on September 22, which will allow you to get started on FUT 18 on the go on iOS and Android.

It is also important to point out that you needed to have created an FUT 18 club before August 1, 2017 in order to enjoy FIFA 18 Early Access on the Web and Companion apps.

So there we have it, now you know exactly when the FIFA 18 Web App is out meaning that you can start opening packs and creating your dream teams nice and early before FIFA 18 launches officially on September 29.

Do you have any questions about the FIFA 18 Web App start time? Let us know below and we’ll try to help.