FIFA 18 is finally here after a long period of waiting and EA has really turned it up a notch in terms of new features compared to FIFA 17. Now we look ahead to support for the game with the next FIFA 18 update 1.15 on PS4 and Xbox One expected to add some big fixes, since there are a lot of improvements still to be made in the game. Update: FIFA 18 1.15 is now live as of August 2, 2018 so skip to the bottom of this article for the patch notes.

There are bound to be lots of problems with FIFA 18 Ultimate Team, or the servers in general which will require EA to make quick game patches to keep paying customers happy.

We have set up this page so you can come here whenever there is a new update, to check for the latest FIFA 18 patch notes as soon as EA release them. 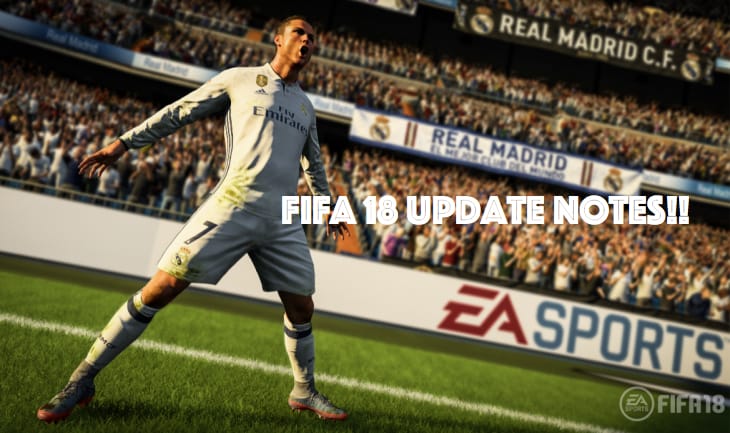 What do you personally need to see from EA to make FIFA 18 better in the next patch? Start your list below and hopefully EA will be able to make these changes quickly as social awareness often leads to fixes.

– Players will no longer be able to select a language when launching the game. The language used will be the language currently selected in Origin
– Players can change this language within the Origin client.

– Changes made to the team sheets in the FIFA World Cup Online Tournament will now save and persist between boot sessions
– Changes will be saved to a file called WC Online Squad Customizations.

– Customize controls and game settings tiles now work correctly with the settings defined in the accessibility settings screen.
– Rarely the game would crash when attempting to rapidly progress through World Cup Online friendlies

– A crash during the World Cup Ultimate Team club creation flow for some players
– This crash would occur if the player selected a language when launching the game that did not match the default language selected in Origin.
– Toggling between the two teams on the Player Ratings screen in the Pause Menu would sometimes cause the player heads to change size.
– Accepting a game invite to another mode within FIFA, while in the World Cup Ultimate Team menus, was causing some visual corruption until the game was shut down and restarted.
– Players sometimes getting an error message following the completion of the group stage of the FIFA World Cup Online Tournament.
– The Swap with Duplicate option was not properly displaying on a Player Item in Duplicate storage if you had just sent another version of that Player item to your club.
– Players getting an error message when attempting to send a duplicate Player Item to their Duplicate Storage after they have swapped that item with an item in their active squad.
– The latency bars were not properly displaying the latency to the server in the World Cup Ultimate Team Online tournament mode.

– Rarely the game would crash after entering and exiting Ultimate Team numerous times.

– Fixed a crash when searching for a player that you had previously scouted on a different team if that player had been fully scouted by your 6th hired scout.

– Rarely the game would crash if you suspended and resumed the game while in the Instant Replay screens.

Bookmark this page to see any new FIFA 18 changes whenever they happen. If EA jumps version from FIFA 18 1.14 to 1.16 – let us know in our discussion section below.

Let us know when you see the latest version available to download on PS4 or Xbox One and we’ll get the notes to you as soon as possible.