We are counting down to the FIFA 18 POTM or Player of the Month for September, which EA will be putting into Ultimate Team very soon with a special card based on the result of the vote.

The great thing about it for FIFA players, is that you vote counts as to the final vote and now the nominations are open allowing you to participate.

Sadio Mane was the POTM for August, which resulted in the first POTM card during FIFA 18’s launch which was a crazy 87 rated card. 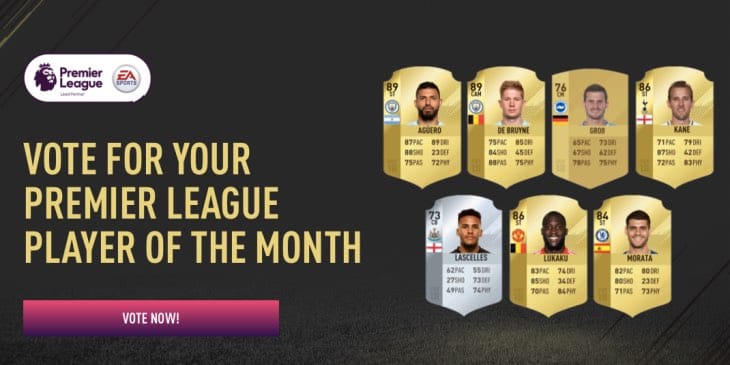 Now the nominations for the Premier League Player of the Month in September are live, as you can see above.

They include Aguero, Kane, Grob, De Bruyne, Lascelles, Lukaku and Morata making it an amazing list. Kane has just had an In-form card, so we’re not sure if he’s going to get a POTM straight after but then again he can’t stop scoring at the moment.

7 players. 1 winner. Who's your #PL September Player of the Month?

What is your prediction for the result and will you be going for the card via SBC or buying from the transfer market?

Vote here now and let us know who you went for!