We now have some some more FIFA 17 news to bring you now as we build up to the release of the game this September. We notice many of you have been asking to see FIFA 17 player ratings predictions, so now we can give you some insight into this by looking at potential FIFA 17 ratings for Messi, Ronaldo and Suarez.

These are going to be the three players that everyone look at, with the inevitable debate about to happen again on if Ronaldo should have a higher rating than Messi for FIFA 17.

It’s worth pointing out that Messi’s contract with EA appears to have run out, which is why we see four new stars being promoted with the game launch – Rodriguez, Martial, Reus and Eden Hazard.

Will this have a bearing on his FIFA 17 rating though? According to YouTuber Fuji who has come up with these nice designs as well as rating, Messi will once again be 94 rated in FIFA 17.

Staying on the fence, we also see Ronaldo’s rating in FIFA 17 at 94 as well, which is a +1 upgrade from his FIFA 16 rating which we can definitely see happening. 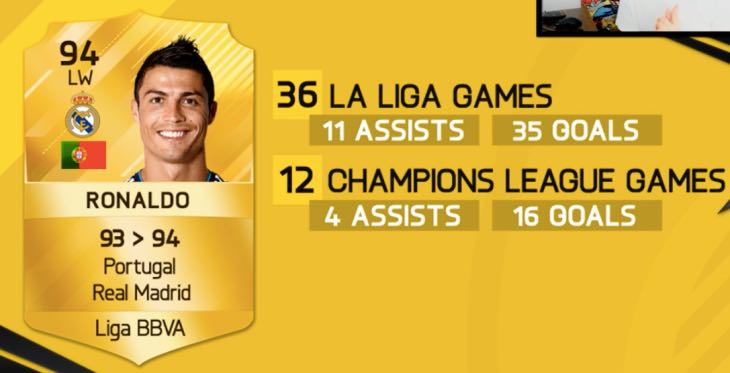 The big one though is Luis Suarez who is undoubtedly going to get a massive upgrade after an amazing season with Barcelona. Suarez shipped with a 90 rating in FIFA 16, but in this prediction we see a 92 rating which would be nice if it happened.

Watch the video below to see FIFA 17 rating predictions for other players such as Neymar, Lewandowski, Gareth Bale and Sergio Aguero.

Do you agree or disagree with the ratings? Leave your thoughts below!