We continue to bring you breaking news regarding the widespread internet outages today which have affected many games but also some of the world’s biggest companies such as Twitter, Netflix and Paypal.

Unfortunately, it appears that the attacks are still ongoing as at the time of writing, PSN servers are still down on October 21 and as a result it means that high profile games such as FIFA 17, Black Ops 3 and Battlefield 1 have all been hit.

We’ve already told you about the massive Battlefield 1 outage which is present here, but now we have confirmation from EA that FIFA 17 Ultimate Team servers are also having problems and a result, EA has been forced to shut down match creation on PS4 – meaning that nobody can play a single online game. 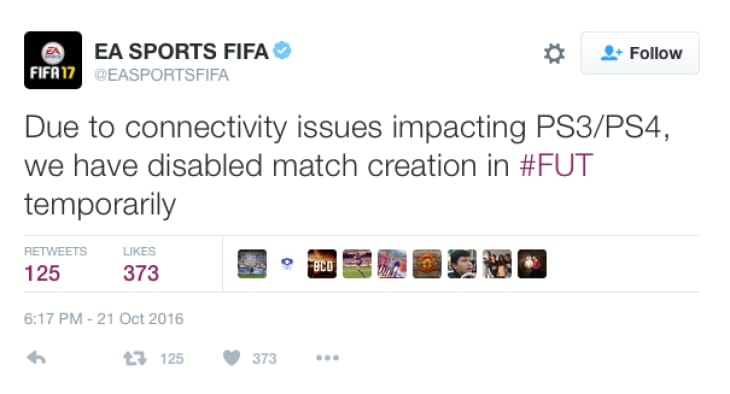 This is a sad state of affairs to happen on a Friday when gamers are expecting to enjoy a prolonged session after a long week studying or working.

The alarming thing to note is that Sony’s official PSN status checker which is supposed to update in realtime is still showing that all PSN services are up and running on October 21 – which certainly is not true.

We have not heard anything specifically from Black Ops 3 developers Treyarch yet, but we’ll keep you updated as the story develops.

Are you shocked that the PSN is coming under attack yet again and targeting all of your favorite games? Let us know if service is down for you right now and what game you were trying to play. Keep checking back for status alerts from the PR team.