After taking a look at how Real Madrid players may shape up in FIFA 17 Ultimate Team, it’s only fair that we turn our attentions to their arch rivals now by taking a look at some potential FIFA 17 Barcelona ratings predictions.

All eyes are naturally going to be on ‘MSN’ once again, with EA likely to alter the ratings amongst the three star players with Messi, Neymar and Suarez.

We told you that it was likely that Ronaldo will have a 94 rating and based on this predictions it looks like EA will keep Messi at 94 as well. 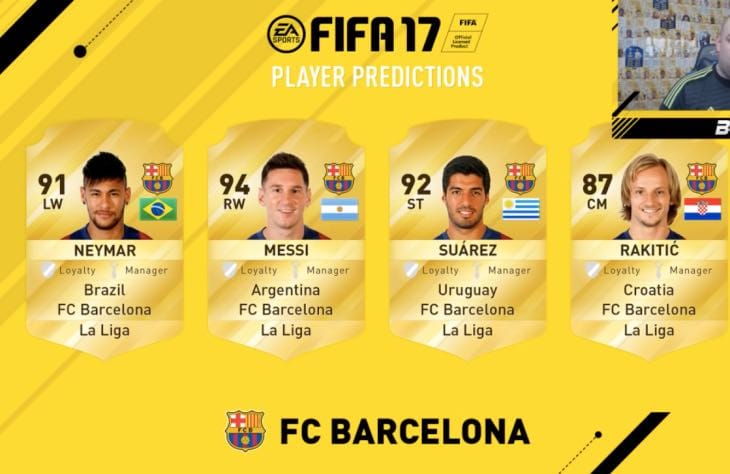 Nobody will argue that Ronaldo deserves an upgrade this year and we definitely can’t see Messi having a 95 otherwise there would be no room for in-form and TOTS/TOTY cards during the season.

Elsewhere though, Suarez and Neymar are set for huge upgrades. Suarez was a 90 in FIFA 16 and Neymar was an 88 before being boosted to 90 in the winter upgrades.

These new ratings for FIFA 17 look very nice, Suarez at a 92 and Neymar at a 91 – anybody disagree with that?

Check out the video below for the full Barcelona player ratings for FIFA 17 and leave a comment below with your thoughts.