We are just moments away from finding out when the FIFA 16 Winter Upgrades Week 4 are out for Ultimate Team. We know that EA release a new list on Friday and now we are expecting the new players to be revealed at any moment.

EA could have saved the best until last as well. If early leaks are to be believed, the FUT 16 Winter Upgrades Week 4 list should include upgrades for Neymar, Douglas Costa and Bayern Munich rising star Coman.

We are also curious to see if any Liverpool players will get an upgrade, but given that they didn’t feature in weeks 1-3 – it looks unlikely at this stage. 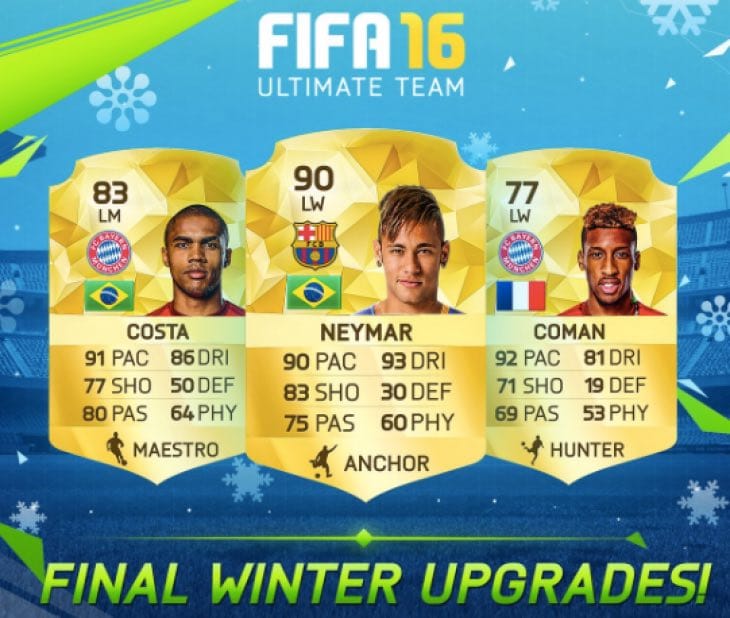 Keep your eyes peeled to EA’s Twitter page to see when the new FIFA 16 Winter Upgrades will be out for Friday February 26. We have a feeling it will be close to 6PM UK time for when the players are actually live in packs and on the transfer market with their upgraded stats.

Leave your last minute predictions below, as this could be the last upgrades that EA issue for this year.

Update: EA has now released the Winter Upgrades list for Week 4. Big upgrades for Neymar and also a sneaky upgrade for Liverpool’s Jordon Ibe, up to a 71! Check out everything here.