It’s no secret that there are plenty of candidates for selection as well. Top of the list has to be a FIFA 16 Winter upgrade for Aubameyang, Dortmund’s in form striker who has been scoring lots of goals and earned himself 2 in-form cards up to an 84 rating.

EA always upgrade those players who have two or more in-form cards, so an Aubameyang upgrade for FIFA 16 is a fairly certain one at this point. 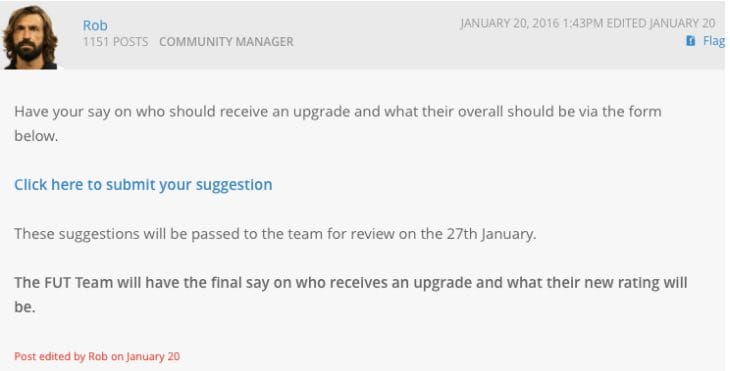 Another player who should get a nice upgrade is Bayern Munich winger Douglas Costa. He currently has an 81 rating, but don’t be surprised if EA decide to bump him up to an 83 – if so you may want to buy his current card now and then sell for a profit later.

You can see from the image above, that EA recently asked the community for help on choosing who should be given a Winter upgrade for FUT 16 – so it is definitely happening soon with the event likely planned to start here.

Other players that are predicted for the Bundesliga Winter upgrades are Raffael, Sane, Ginter and possibly Henrikh Mkhitaryan as well for Borussia Dortmund.

Do you have a Bundesliga squad as your main team on FIFA 16 this year? If so, tell us what would be your personal picks for Bundesliga upgrades in February?