As always, EA will issue some major upgrades for players after TOTY and this usually happens at the beginning of February – after the January transfer window.

EA also bases their player upgrades on real-life performance which means that any player who has been performing well is likely to get a +1 upgrade overall, in some cases even more if a certain player has done really well.

Some of the standout candidates so far have to be Jamie Vardy and Riyad Mahrez for Leicester City. It’s a certainty that both will be upgraded, so the only matter right now is to guess by how much.

Many FIFA 16 Winter upgrade predictions suggest Vardy could go up to a gold 79 which would be a staggering +8 from his original 71 silver card. He’s been the standout player in the BPL so far this season and don’t forget that EA has already given him a record breaker card with an 82 rating on it, so 79 isn’t so farfetched.

This is only just scratching the surface. Don’t forget that Dele Alli will also get a massive upgrade for FIFA 16 as well which we’ve already discussed in a previous article.

As for the release date, it should be happening on Monday February 15,2016. We say this, as this was the exact date in which the FIFA 15 Winter Upgrades happened last year. 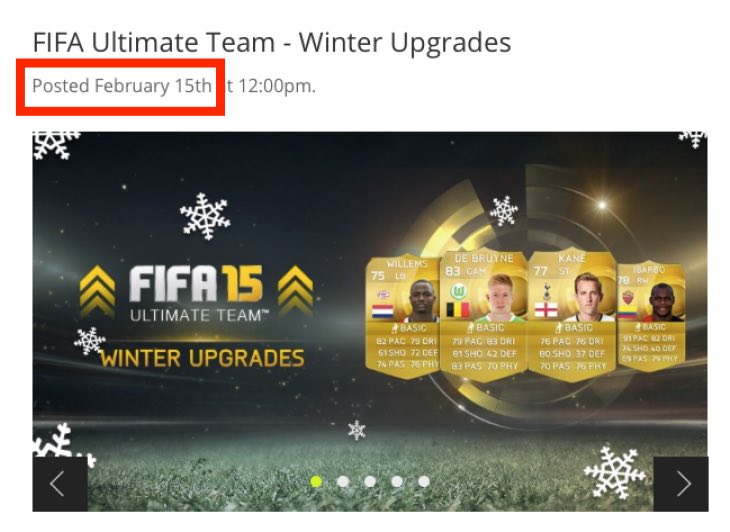 EA love to stick to patterns as we have seen with TOTY so unless anything drastic happens, it should be following the same schedule – if it doesn’t, we will of course update this for you.

Another vital piece of information to remind you about – any in-form card of a player that receives an upgrade will also get upgraded. So you may want to do some investing on the transfer market in view to a potential nice profit.

What do you think of the FIFA 16 BPL player upgrades mentioned above – who else would you add to the list? Check back soon when we will take a look at the predictions for BBVA, Bundesliga and Serie A Winter upgrades.